Taddy Blazusiak is still the undisputed king of the indoor races as he had taken the championship title for the super enduro held in Poland. The six-time world champion delivered an astounding performance at the jam-packed stadium in Krakow. Carding a 2-2-2 scorecard, this resulted for his advancement at the top of the podium.

“Incredible, I wasn’t really expecting that,” said Blazusiak. “For sure I wanted to do well but I always thought getting on the top step of the podium was going to be a big ask.

“My starts did it for me tonight, I got out front nearly every time and that made the difference, that’s got me the #1 plate.

The track in overall was difficult. It was a combination of soft and tacky, deep in ruts, a snotty matrix and a nasty tyre wall. With these factors counted, it sure did made the game as exciting as it is.

Colton Haaker who had gotten himself the Akrapovic SuperPole had a rather rough race as he started a bit not too well which resulted in him falling a few places behind the leaders. For the race one, the fastest to pass the traps was Blazusiak but it wasn’t long before Cody Webb managed to catch up to him and in time took the lead.

A crashed occurred in which hindered the advancement of Webb. This gave Blazusiak an opening to gain the upper hand and take the lead but Webb quickly managed to get up and revved up again managing to close the gap and taking the lead yet again and won. During race two, Blazusiak pulled off a masterstroke coming from the very outside of row two to second off the start behind Alex Salvini. With this strategy, Blazusiak managed to roared forward and took the lead for lap one. At the back was a complete disarray as Haaker fall over on the tyres and set up a road block. Jonny Walker went through the mess but becomes stuck in the Maxxis hoarding. It took six men and one lap to prize his KTM free. Blazusiak enjoyed his fast paced speed around the track but at the same time Billy Bolt was slowly gaining up speed; eager to catch up. Even though this is his SuperEnduro debut, he managed to get past Blazusiak and surged forward with a lap to spare to win.

In race three, Blazusiak needs to have good results as the score sheets shows that Webb and Bolt weren’t too far behind him. Both of them are aiming for Blazusiak mistakes for his mistakes will be their benefits. Midway through the race, Blazusiak had the upper hand and was leading. Webb was eager to take home the title as he revved through until he eventually won the round with Blazusiak in 2nd place.

However, even if in the second, Blazusiak  still come on the top of the podium and was hailed as the victor.

“Winning at home is amazing. It’s one of the best feeling’s in sport. I just took tonight as it came, and thankfully it came good.

“It’s weird though, I wasn’t expecting myself to win. I was just happy to be racing again and if it happened then great. Victories like this mean a lot now, I’m going to enjoy this moment.” said Blazusiak.

Despite of his 2 rounds of wins, Webb’s first race which ended in him fifth place took the damage. This kept him from catching up the scores of Blazusiak. But with his performance, he will be a force to be reckoned with and will be a real page turner in Germany.

“Two wins out of three ain’t bad, but it was Taddy’s night tonight,” told Webb. “Race two screwed me up, granted I had some mistakes in race one despite winning, but race two’s fifth did the damage.

“But my speed is there, I’m happy with that, I think having been out of SuperEnduro for one year I need to adjust a little but Riesa is just around the corner so I’m looking forward to that.”

For Billy Bolt, it was quite a ride and experience for his debut at the super enduro as he put up an astonishing performance all throughout the entirety of the event. He was on the third spot with a scorecard of 5-1-4.

“I literally had no idea what to expect of tonight,” said Bolt. “I mean I’d never raced indoors before so, against these guys, a podium was a tall ask.

“Race two win came as a surprise too. To beat Taddy for a race win in Poland is pretty cool.

“Overall I’m pumped with tonight, racing SuperEnduro is definitely way harder than practicing for it, but I’m excited for round two in Germany.”

In fourth place was Manuel Lettenbichler who also had a solid performance. Alfredo Gomez, who made his debut with the Husqvarna landed in fifth. In sixth place was Colton Haaker, who expressed his feelings, “I just messed up off the start twice tonight. I was properly last at one point. Race three was ok with third, but tonight was one of those night you just want to write off and forget about.”

Danny McCanney is in seventh and in eight was Walker. “Tonight was a bad day at the office, there’s not much more I can really say.”

Kyle Flanagan of South Africa won the Junior class with a close fight with Matteo Cavallo for the overall honors. Flanagan claimed a debut overall win in SuperEnduro. For Cavallo, Poland manifest his SuperEnduro debut and with a race three win, it resulted in the runner-up result. In third overall was Emil Juszcazak. 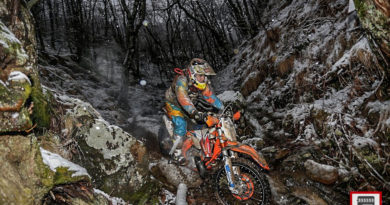 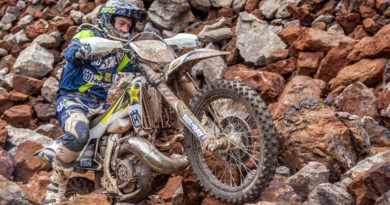 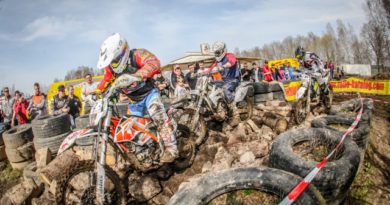