The exhilarating AMA EnduroCross main event held at the Citizens Business Bank Arena in Ontario, California ends in an astonishing victory for Cody Webb who grabbed his sixth straight win in the said competition. In addition to this, he also got his third EnduroCross championship in four seasons. Battling him in the top spot of the podium was Ty Tremaine of RPM KTM and SRT’s Cory Graffunder who were second and third in the final ranking.

“It’s awesome to get the championship back again,” said Webb. “It was a really good year for me.

“We did a lot of good work with the team and I was just more prepared this year. I’m looking forward to doing it again next year now that we have a great setup and I already have some ideas to fine tune it a little bit more.”

Racers under the age of 21 were acknowledged. It was under the Super EnduroCross Junior championship where the likes of Trystan Hart and Ty Tremaine were battling it out. Hart had managed to hold off Tremaine from grabbing the title by just a single point. It was really a close call though. In the overall championship, the two of them were both in the list placing second and third respectively.

Canada’s Shelby Turner grab a hold of her second championship in a row in the Women’s Class. The Canadian won five of the seven races and fulfilled second in the two races she did not win.

Some of the highlights of the event were Webb having the fastest hot lap during the afternoon. In addition to this, he also had the win in the gate pick qualifier. Keeping Webb in a second-place finish in the qualifier had been the result of Tremaine being in second spot in the hot laps. While Cooper and Hart duked it out for the third spot, but eventually, the spot was owned by Cooper Abbott.

During the gate qualifiers, it was once again battled mostly by Tremaine and Webb. The gate qualifiers will determine the match up for the bracket races. In the end, it was Webb who managed to take the lead and racing his way for the win. At the main event, Webb had a rather rough start as he didn’t managed to have a great jump to start, but despite of this occurrence, he managed to still take the lead and managed to pass through the first obstacle which is the challenging wood pit. The entirety of the first lap had been favorable to Webb until he went down at a rock pile. This dropped him into the sixth position. Eager to bring back his previous lead, Webb drove his way into the third spot just behind Tremaine and Kyle Redmond. He then passed the two of them when they took the No Joke lane. But before he got the chance to claim the lead, he had stayed in the third spot waiting for the right opportunity. Having the lead back, Webb managed to widen the gap between the riders behind him in preparation for him entering the No Joke Lane at around lap twelve of fourteen. Having perfectly passing the said lane, he rode his way into victory.

“I got past Kyle and then past Ty when he went through the No Joke lane,” Webb said. “But right after that, again, I hit a rock or something in the dirt on a flat corner and tucked the front end—almost going down again.

“Luckily I fought through it all and had a good enough lead that I could take the No Joke and get the win.”

With just a margin of 11 seconds, Tremaine managed to finish in second place. He also ended third in the championship for the second year in a row. Despite this achievement, he was rather disappointed because of the fact that he had lost out on second position by a single point.

“I’ve been struggling with starts all year and I think this is the first race where I’ve started inside the top 10,” told Tremaine. “I was right behind Webb and my plan was to just stay with him as long as I could.

“Then he went down and I took the lead and ran up front for a while.

“I went through the No Joke lane and Webb got around me, but I think I came out in third or something, which wasn’t bad. I ended up getting around Redmond for second and held on to the finish. I’m super happy with how I ended the season.”

A great performance of Graffunder secured him in third place. Managing to hold the second spot during the first nine laps, Redmond seemed to run out of luck as he dropped to third and lost one more position when he took the No Joke lane on the final lap. In fifth place was Noah Kepple of GasGas. Mason Ottersberg finished sixth. Hart had a crash that resulted in his worst finish of the season and got the seventh place. Joan Pau Segura finished eighth on his GasGas. Ty Cullins finished ninth and Geoff Aaron rounded out the top ten on his GasGas. Cooper Abbott, Jordan Ashburn, Wally Palmer, Eric Rhoten and Gary Sutherlin finished eleventh through fifteenth respectively. For Sutherlin, the 2017 WORCS and AMA Hare & Hound champion, it was his first EnduroCross in several years. As for Ashburn, it was only his second ever EnduroCross.

In the Women’s class, Shelby Turner together with her KTM won the championship. Kacy Martinez (KTM) and Tarah Gieger (Honda) were in second and third respectively. The order for the 2017 Championship was the same.

On his Purvines DA8 Yamaha, Destry Abbott took the Vet class championship title. He was still undergoing a Chemo treatment that is why he has not competed in the pro class. The fatigue is too much to handle given his current condition. Dan Hayakawa finished second and David Stirm in third.

In the Amateur B class, Jared Prosser won the title aboard his Yamaha. James Flynn (Husqvarna) and Dan Hayakawa (Husqvarna) completed the top three.

An additional two special classes were also present for the locals in The Ontario event. In AMA District 37 race, Brad Goolsby took the win in the Pro Invitational. Jordan Gamboa and Travis Damon finished second and third. In the District 37 Amateur race, Hayden Hintz had a close win over Jordan Gamboa. In third was Ryan Kudla. 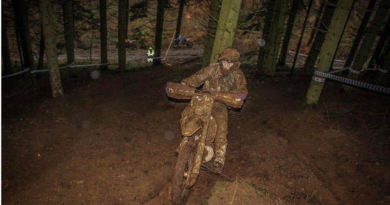