Thad Duvall, who is the series point leader, also came behind Baylor. This results to Baylor carving nine points out of DuVall’s lead in the series standing. This will be a very close race as there are only 2 rounds remaining I the series. All the riders are surely pumping themselves up in top condition to catch up to the leaders. In DuVall’s case, he is currently at the second place just seven points out of first.

“We started off the first test with a win and that got me off on the right foot,” mentioned Baylor. “After two tests, I think me, Grant and Thad were within three seconds of each other, so I knew it was going to be a fight today. After test three I had to make up some time on Grant, but I got the test win in the last three tests and that gave me just the edge I needed.”

Despite winning 3 tests, Grant Baylor had a hard time during the fourth test which resulted to a flip out. The KR4 Arrive-n-Ride rider expressed his dismay on an interview.

“It was really right racing early in the day and I felt like I was flowing really well with the bike and I ended up winning tests two and three, but after that I kind of went downhill,” Grant said. “In test four I caught up to Russell Bobbitt but I struggled with the dust and couldn’t get close enough to pass him.

“Then in the fifth test I just kind of fell apart, even though I managed to get second. To top it off, I threw away any chance I had at the win in the last test when I went down. I came around this corner and a vine wrapped around my front wheel and I had to get off the bike to get it loose. If not for a few mistakes I might have been on the top step.”

A tear in his left wrist ligament didn’t hinder the point’s leader DuVall from doing an incredible performance in this round’s race. The injury forced him to abandon this year’s International Six Days Enduro in France.  Nevertheless, he managed to finish third.

“I flew home early from France and I got about five different opinions on what was wrong with my wrist,” said DuVall. “It was severe, but maybe not as severe as we thought. At first they thought I needed surgery, but it turned out I didn’t need it, which was good. So I rode this weekend with a brace and salvaged what I could.”

DuVall attained the Rockstar Energy Husqvarna Factory Racing off-roader 21 valuable championship points in effort of being the second-fastest in test 2, 4 and 6. He came at the 3rd place for the day.

“It was tough, I noticed in the last test I had to use four fingers to pull in the clutch. Since I probably wasn’t even supposed to be riding today, I guess third place is something to be happy about.” Added DuVall.

KTM rider Evan Smith is considered to be a steady competitor as it is shown in his performance. This round he finished fourth and has been improving and improving as he progresses. “Today went well; I felt like I rode pretty well and I think I put in some consistent times,” said Smith. “I had a few falls and tweaked a few things on the bike but for the most part I kept it moving forward and I’m happy with my ride. It was pretty sketchy out there and it was tough just keeping it on two wheels.”

Josh Strang of Rockstar Energy Husqvarna Factory Racing finished fifth while in sixth place was SRT Racing KTM’s Cory Buttrick who was off only by six seconds. A close fights indeed.  A rare appearance was made by Ben Kelley in national enduro competition. Regardless of a slow start which caused him to finish in 13th place during the first test, he proved to be a serious competitor as the day went on. Eventually, he earned the 7th spot.

KTM’s Jesse Groemm attained the eight place over AirGroup Racing/Enduro Engineering Husqvarna’s Thorn Devlin. The race between the two of them was so close that only 2 seconds was the gap of Groemm from Devlin. Devlin also won the Rekluse Expert/AA division. KTM-mounted Logan Lowrey had a close match with Devlin as he finished second in the Rekluse Expert/AA division. Lowrey ranked 13th in the overall resulrs for the day. Third place in Expert AA class and 15th overall was AirGroup Racing/Enduro Engineering Husqvarna’s Tyler Vore. With 7 straight wins, Delvin is undefeated for the year.

“It feels good to wrap up the title,” Devlin said. “It was so dry out there and I knew if I went in tight I would be sliding all over the place so I tried to ride loose and it paid off.” With her KR4 Arrive-n-Ride Husqvarna, Tayla Jones is still undefeated on the year in the Women’s Elite Championship. Taylor Bonecutter and Jennifer Sheppard was in second and third place respectively.

“I’m pretty stoked to wrap up the title,” said Jones. “Last week I wrapped up the GNCC title, so it was great to add this one. It was a bit dry out there so I just tried to stay upright and not make too many mistakes, but I ended up having a good day.”

The battle of 2017 Kenda AMA National Enduro Series will continue on October 15th for the Zink Ranch National Enduro, round eight of the series in Sand Springs, Oklahona. 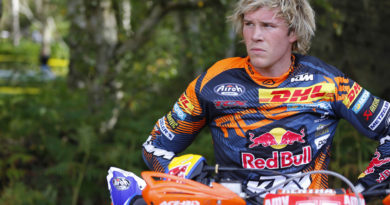 DANIEL SANDERS RETURNS TO AUSTRALIA WITH HUSQVARNA FOR 2018 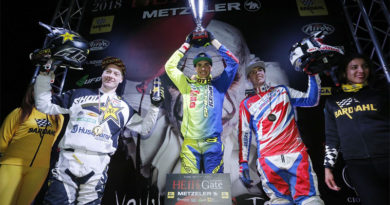 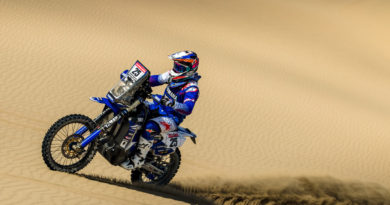 FRANCO CAIMI STARTS OFF BAJA INKA RALLY WITH A WIN