The pace is high and you don’t need to ask why as Manuel Lettenbichler came off a strong performance to claim the Gold Class win from Wade Young and Jonny Walker in day 1 of Off Road Red Bull Romaniacs.

After an epic competition in Sibiu, the surrounding of Carpathian Mountains is next in line for riders. The said event starts the demanding four days of racing with exhausting 160 kilometres to finish.

2018 Red Bull Romaniacs has really been a tough one. Lettenbichler took nine hours to bring up the crown with pure enervation and excitement.

The starting line opens up at 6:30 as competitors began their quest in day 1 of the competition. With a point-to-point course put out, the course took them crossways the mountains to the finish line at the Straja ski resort. The difficult trails offered an early wake up call for competitors across all classes as heavy rain and periods of rain challenge up the whole course. Taddy Blazusiak lead the field out, followed by Wade Young and Billy Bolt. A sorry crash from Blazusiak allowed Young to hold the position throughout the day and eventually finished after nine hours of pure extreme racing.

As the fourth Gold class riders are ready to go, Manuel Lettenbichler went on a high note and quickly worked his way to past Billy Bolt and Taddy Bazusiak. Shadowing other riders in a large course of the day, Lettenbichler shaped enough in hand to take the win.

Lettenbichler said, “That was a pretty good day. At the beginning I managed to pass Taddy and Jonny and then around checkpoint eight I jammed up with Wade. I tried to stick with him but at the end he was just too fast, so I rode my own stride and got to the finish in one piece. I think my time was good for the overall, which is awesome. It’s really, really wet out there and the last part of the day was so muddy. The clay was so slippery — it was hard to get any grip at all. Now I need to focus on tomorrow and hopefully ride another good day.”

Chasing Lettenbichler all day urged Wade Young to finish first and take the provisional overall lead. Wade Young said, “Manni was chasing me down all day but he never got past me. If I made a mistake I could always hear him behind me – he kept me honest all day and kept me pushing. We knew this morning after all the rain it was going to be difficult. It means you end up using so much more energy trying to keep things under control and in a straight line. Going into the first hill was probably the toughest part of the day for me, I hadn’t quite got used to the forest and it was so slippery – I pretty much had to push the whole way up.” Jonny Walker late game mistakes cost him to be closed enough competing Lettenbichler and Young on the top of the podium. Walker said, “That wasn’t my best day — the afternoon didn’t go too fine. I made a few errors and lost some time. However, it’s only day one and I feel good. I did have a few problems as it was really tricky riding in the low cloud and fog. But aside from those issues I’m happy with how things have gone and I’m looking forward to tomorrow. I know there’s room to improve.”

The Reigning Romaniacs champion Graham Jarvis went on a tough opening day in the mountains. The number one plate holder went exhausted but still finished the race with fourth overall. Graham said, “It was a pretty tough day, I basically ran out of energy so I am just happy to get it to the end. The rain made all the hills really difficult – there were no easy ones out there so that’s what has sapped all my energy and it’s been a really long day. This afternoon I started to get tired and lost time on the guys in front. All I can do is come back tomorrow and keep pushing – keep battling away and see where we end up.” 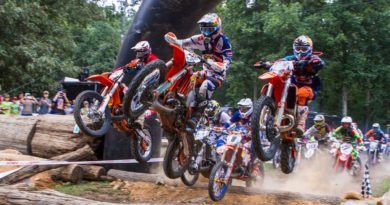 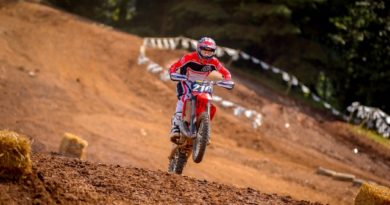